The joint cartilage normally allows for the smooth and painless gliding of the joint’s surfaces on each other. In Osteoarthritis this cartilage pain is the result of bare joint surfaces rubbing on each other. Wear occurs particularly frequently on the middle and end joints of the finger. The base joints are affected, but less frequently. Inflammatory joint disease (Rheumatoid Arthritis) may destroy these joints. Hereditary factors seem to play a role in the emergence of arthritis; it can also occur as a result of a joint related injury (post-traumatic arthritis). Women are significantly more likely to suffer from osteoarthritis of the finger joints than men.

The affected joints are painful, initially only with certain manual activities, later also at rest. In addition, swelling occurs due to the inflammatory reaction and remodeling processes on the adjacent bone, with clearly visible bone spurs or nodes.  With advanced stages, axis deviation can occur in the finger at the height of the joint. Over time, there is an increasing restriction of movement, which can ultimately lead to complete stiffening of the joint.

Conservative measures can be used to relieve pain in the case of stable moderate symptoms and only minor changes shown on the X-ray images. Joint protection measures and the use of aids are instructed by a hand therapist to reduce the joint load. In addition, local pain relieving and anti-inflammatory measures can be used like of electrotherapy or ultrasound treatment. Under certain circumstances, X-ray guided cortisone injections of the joint, can help to alleviate the symptoms for a certain time. In principle, however, the osteoarthritis cannot be cured because the worn joint cartilage is unable to regenerate. Cartilage strengthening  supplements are occasionally used, but the effect has not yet been proven. However, certain patients report an improvement in the symptoms. If the measures mentioned no longer lead to sufficient pain reduction, surgical measures can be considered.

In addition to the changes in the fingers that can already be seen  and the pain symptoms described by the patients, typical changes are also evident on the X-rays: At first a narrowing and irregularity of the joint gap is shown (Fig.1),  later small bone cysts below the damaged joint surfaces and reactive bone nodes on the edges are evident. (Fig. 3)

Depending on the pain, fusion (arthrodesis) of the joint is the standard therapy. Often, due to advanced arthritic changes, the remaining mobility is found to be very low anyway and therefore, the stiffening of this joint is, functionally, almost irrelevant. A skin incision is made on the extensor side of the joint, and the damaged joint surfaces are removed  so that they are evenly matched.

With an additional small incision at the front of the fingertip, under the nail, a screw is then inserted, connecting the bony middle and end segments in an aligned position. The bone ends can then heal together like in a fracture, under slight compression. Bone nodes are removed and lateral deviations are corrected, so that there is a satisfactory result both functionally and optically. Finally, following hemostasis the skin is closed and bandaged and the finger is placed in a splint. 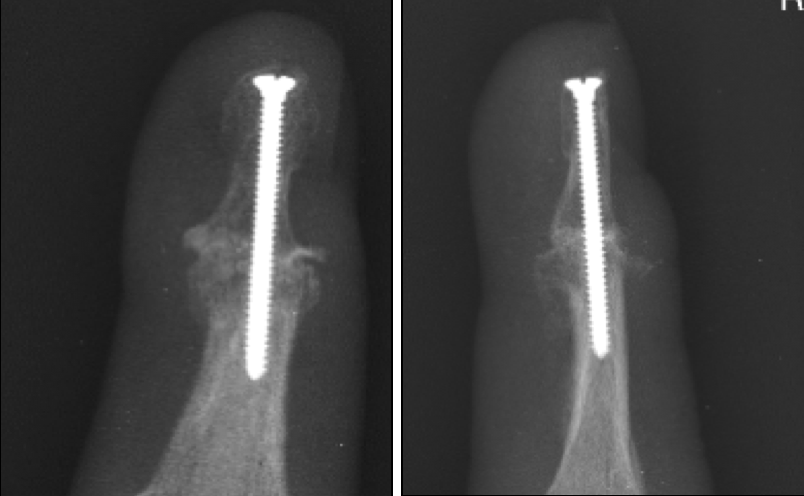 After the operation, the finger will swell temporarily. Rarely, nail growth disorders can occur. In very rare cases the bone fails to heal, resulting in the need for a re-operation and fusion once again, often needing their own bone material. Patients rarely report that the inserted screw is irritating.

After a few days, when the finger swelling has sufficiently subsided, the splint which was fitted in the operating room will be replaced by a custom-made splint that is made by the hand therapists and only immobilizes the end-most finger joint. The adjacent joints can thus be moved freely and, if necessary, exercised. The stiches can be removed after 2 weeks. After 6 weeks, an X-ray checkup will be carried out, and if there is sufficient bone healing, the splint can be removed and the weight bearing training can begin. Removal of the inserted screw is usually not necessary. If however, over the course of time it is found to be annoying, which is very rarely the case, the screw can be removed after the bony healing has been completed.

Surgical Treatment of the Doral and Middle Finger Joint

The mobility of the base joint  and of the middle joint of the finger is of much greater importance for the function of our hand than that of the end joint, so that if possible, a mobility-preserving surgical procedure should be chosen.

For decades, the standard surgical procedure for joint replacement has been the implantation of an joint prothesis made of silicon. This consists of a specially shaped component which can be understood as a placeholder in the former joint, and due to its shape enables a certain degree of mobility.

Today, however, there are also prostheses for the finger joints that look like a “real” joint replacement and consist of two components, similar to a knee prosthesis. The component closest to the body is shaped like the head of the joint, the other like the base of the joint. Good results, after implanting such a prosthesis, have been shown to date, resulting in them being used more and more. As to which implant should ultimately be chosen, must be discussed for each case; solid bone stock is essential for the implantation of a “real” prosthesis. As a rule, the operation should be carried out under inpatient conditions with an anesthesia of the arm nerves (plexus anesthesia).

A skin incision is made over the base or middle joint on the extensor side and the extensor tendon is exposed and split longitudinally; this is then cut  in the middle to get access to the joint. Alternatively, the approach to the joint can be performed on the flexor side,  disturbing bony spurs are removed with a saw and the  joint surfaces can be exposed. The bone shafts are then opened from here with a small grinding machine in order to anchor either the silicone placeholder or the prosthesis. The correct size of the implant to be used is determined with the help of test prostheses – the joint should neither be fitted too tightly, which would impair mobility, nor should the prosthesis sit too loosely, which would lead to instability of the joint. After the implant has been inserted, its correct position is checked with X-rays. The stretched nerve is then stitched over the top of the joint and the skin is sutured, often with the insertion of a small drain. After a sterile dressing has been applied, a splint is fitted.

In certain cases, prosthetic joint replacement is not possible, e.g. if the joint and the adjacent bone have been destroyed to such an extent that the bone quality does not allow to fix the implanted prosthesis, or the lateral joint ligaments are no longer sufficiently stable. In these cases,  fusion (arthrodesis), in a functionally appropriate position (slightly bent position), should be carried out on the middle  joints of the fingers.

After the operation, the affected finger will be temporarily swollen and there will be a scar over the joint on the extensor side. Mobility will be reduced, despite a properly executed operation and after-treatment because an artificial joint can never achieve the same functionality as the healthy “original”.

In rare cases, the implant can loosen and lose its correct position, which leads to pain and an additional restriction of movement. A new operation is then usually inevitable. The silicone implant can become brittle and break over time; however, this is usually not a noticeable problem, since the scarring processes of the soft tissues around the implant have established a stable situation.

If a drain has been inserted, it can usually be removed after 2 days; the stitches can be removed after 2 weeks. The finger joints may be moved right away, without weight bearing, under the guidance of a hand therapist. In the first 4 weeks after the procedure, a flexion of 60-70 ° in the affected joint should not be exceeded. The occupational therapist will replace the splint fitted in the operating room with a custom splint, which is to be worn for the first few weeks. After 6 weeks, an  X-ray of your finger is performed and provided there are no objections, mobility and strength can be increased.