A ganglion is the most common benign wrist mass. It is often visible from the outside as a bulge, most often located on the dorsal side of the wirst, but also on the flexor side of the wrist. The size can vary, it feels firm and elastic and is connected to the joint via a stem, through which it is filled with gelatinous (joint) fluid. A ganglion can also cause complaints even if it is not yet recognizable from the outside. It is then referred to as an “occult” ganglion. It can also penetrate a bone and partially fill it. Women between the ages of 20 and 40 and children are particularly affected.

The exact cause that leads to the formation of a ganglion is ultimately not fully understood. Over-use in combination with a genetically loose joint ligaments are factors that may increase your risk of developing a ganglion cyst. There may be a change in the joint capsule tissue with the formation of a weak point over which the ganglion distends outwards. The stalk through which it remains connected to the joint can be thought of as a one-way valve that no longer allows the fluid to flow back from the ganglion into the joint. 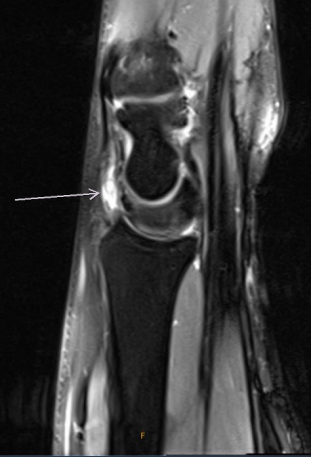 In addition to the often-visible bulges, which may be aesthetically disturbing, there is  pain that increases when the wrist is under load (weight-bearing, manual work). Pain typically occurs in wrist extension (push-up position) in the case of the more frequent, extensor localization of  ganglion on the wrist. The pain usually arises due to irritation of a neighboring nerve. When there is an unclear finding, an MRI or an ultrasound can provide further information. (Fig. 1)

The operation can usually be performed under outpatient conditions with a regional  arm nerve  anesthesia (plexus anesthesia). On the extensor side, a transverse skin incision of 3-4 cm in length is made over the wrist joint. The ganglion cyst and the wrist capsule are exposed,  the extensor tendons are kept aside. The capsule is opened so that the ganglion and stalk can be removed and the joint capsule is closed with sutures. Since the nerve endings, which are primarily responsible for pain perception from the joint, have to be cut as a result of the necessary capsule opening anyway, the nerve in front of the joint is also cut so that there is no new pain – this nerve has no other functions. After hemostasis, the skin is then stitched and a small drain may be inserted. After bandaging, a splint is put on, which immobilizes the wrist for a few days. If there is a ganglion on the flexor side, the procedure is similar, with the difference that the skin incision here is longitudinal on the flexor side. The procedure takes about 30 minutes.

There will be temporary swelling around the wrist combined with restricted movement. After removal of the ganglion on the extensor side, there can also be a certain amount of wrist flexion restrictions the beginning, but hardly ever to a functionally disruptive extent. This is explained by the scarring processes on the joint capsule, opened on the extensor side.  A ganglion can in rare cases recur despite the correct operation.

If a drain has been inserted, it can usually be removed after 2 days; the stitches can be removed after 2 weeks. To limit pain, immobilization of the wrist in a splint is recommended for 5-7 days. The fingers can and should be moved again immediately. Avoid contact with water and contamination of the wound and heavy weight bearing until the stitches are removed 14 days postoperatively. The  wound checks and also the removal of stitches can usually be carried out by your family doctor. Occasionally, occupational therapy is required, but as a rule the active movement and gradually increased weight-bearing are performed on your own.