The two most important ligaments which can be affected by the injury are the anterior talofibular ligament (ATFL) (Fig. 2, A) and the calcaneofibular ligament (CFL)(Fig. 2, B). If other, smaller ligaments are also affected, these usually heal easily as part of the treatment of the other two ligaments.

aAs a rule, the ligaments heal under non-surgical therapy (splint, physiotherapy). Occasionally, however, chronic instability remains. Despite healing, the ligaments may not be tight enough and the passive joint stabilizers fail. Sometimes there is an additional injury to the tendons, especially the two tendons that run behind the outer ankle (peroneal tendons, Fig. 3). Longitudinal/lateral tears occur (Fig. 3) and over time the tendon can be unraveled more and more. In this situation, the active stabilizers of the joint also fail. The lack of passive and/or active stabilizers can lead to recurring sprains.

In the case of acute ligament injuries, pain, swelling and bruising (hematoma) arise immediately after an ankle sprain. Depending on the severity of the injury, one may or may not be able to put some weight on the foot.
Despite the correct treatment of an acute ligament injury, there are occasionally patients who complain of symptoms even after half a year or longer. Mainly there is a feeling of instability with regards to gait insecurity, especially on un-even terrain. Occasionally, patients complain of weakness, pain and swelling, a pinching sensation.

In most cases, a clinical examination can be used to diagnose an acute ligament injury. Classically, there is swelling and tenderness in the area of the outer ankle. Depending on the painfulness of the injury, the stability can also be checked. An X-ray image of the upper ankle is usually sufficient in the acute phase, while ad- ditionally permitting injury to the bone (a fracture) to be ruled out.
In the case of chronic instabilities, the stability can usually be nicely examined with a side comparison. The ligaments are still present months after the original injury. However, they can heal in the wrong place or with a slight elongation, causing instability. This can primarily be determined in the clinical exami-nation and can remain hidden in the MRI. During the examination, the tendons can also be palpated and their function checked. Joint mobility can be exam-ined, and there may be signs of scar impingement (pinching). In case of chronic instability (i.e. half a year after the accident), it usually makes sense to carry out an MRI examination. The main reason for doing this is to rule out accompanying injuries (cartilage damage, etc.) and less so to show instability.

A) Non Surgical
The vast majority of ligament injuries can be treated without surgery, i.e. conservatively. In the case of acute injuries, primarily stabilization with an ASO bandage takes place over 6 weeks, so that the ligaments can heal again in the correct position. As part of physiotherapy, balance can be re-trained and the muscles strengthened to prevent a re-occurring sprain.

In the case of chronic instability, conservative therapy can also be initiated first, especially if physiotherapy has not yet taken place. The most important thing is balance training and strengthening of the foot-stabilizing muscles.

B) Surgical
An operation makes sense when the chronic instability persists, even with cor- rect physiotherapy. The same applies to injuries to the peroneal tendons which cause persistent discomfort. Depending on the pattern and extent of the injury, the following interventions can be considered:
Arthroscopy (Key Hole Surgery): Arthroscopy makes sense when the situation is unclear and you want to see the joint from the inside once again. In addition, instabilities or cartilage damage can be documented. Cartilage lesions can be arthroscopically repaired. The instability can be examined dynamically. In particular, when there is pinching pain after an ankle twist, scar tissue and adhesions can be nicely removed arthroscopically.

Ligament reconstruction: The outer ligaments are most often damaged, and occasionally the ligaments on the inner ankle. By making a skin incision above the inside or outside of the ankle, the remaining ligament is exposed. The actual ligament attachment point of the respective bone is freshly prepared and an anchor is inserted. Using sutures the remains of the ligament are now strengthened by fixing them to this anchor (Fig. 4). Finally, a 6-week immobilization in a Vacoped (Fig. 6) is necessary so that the ligaments can heal and not become too loose again.

Tendon reconstruction/suture: If an injury to the tendons is suspected, these should be exposed and examined. The short and long peroneal tendons can be seen by making an incision above the outer ankle. Depending on the extent of the injury, the defective portions of the tendon will be removed or the tendon will be sewn. If a large part of the cross-section of the tendon is already defective, the two tendons must be sewn together (Tenodesis, Fig. 5) in order to achieve better function and more strength. Here too, a 6-week immobilization in a Vacoped (Fig. 6) is necessary so that the tendons can heal. However, it is important to start physiotherapy early to prevent the tendons from becoming scarred together.

Calcaneal Osteotomy (correction of the calcaneus(heel bone)): It is seldom necessary to perform a correction on the bone, more precisely on the heel bone, in addition to the soft tissue interventions. This makes sense when the rear foot axis is unfavorably aligned . In this way, the tension and load on the reconstructed tendons and ligaments can be reduced. This is usually done via an additional cut on the outside of the heel. To hold the corrected heel bone in the correct position, it is then fixed with a screw or a staple. After the operation, a Vacoped is needed and the foot may only be partially loaded.

Complications and risks can occur during or after the operation and delay the healing process or necessitate another operation. They can never be completely ruled out during operations, even if they are rare during foot operations. In summary, these are:

The operation is only one part of the whole treatment. Follow-up treatment contributes significantly to success. It is important to be aware of what you should consider and possibly avoid. Bandage and Wound Care During your time in the hospital you will be shown how to care for the wound. As long as the wound is not completely dry (wound secretion/blood), the dressing should be changed every day. Do not use ointments or powder directly on the wound surface until the stitches have been removed! Disinfection is not necessary. When changing, always remove the entire bandage. The new bandage must be dry and must not slip. If the wound is dry, a normal plaster (bandaid) is sufficient. An elastic bandage can protect and cushion the operated area. This also reduces the swelling that is still present. If you are not sure whether every- thing is normal, you can contact your family doctor or contact us directly. The stitches can be removed about 2 weeks after the operation. This is usually done by your family doctor.

Swelling and Pain
After an operation, the affected foot is always more or less swollen. This swelling can recur for weeks (up to 6 months). The most effective measure is elevation of the leg. It makes sense to exercise several times a day (walking, less standing), but only for a short time. When the foot is stretched and starts to hurt, this is a sign that the leg should be elevated again. Despite these measures, pain in the operated foot can occur in the first days and weeks after the operation. To help alleviate this, you can take the pain medication that we have given you. 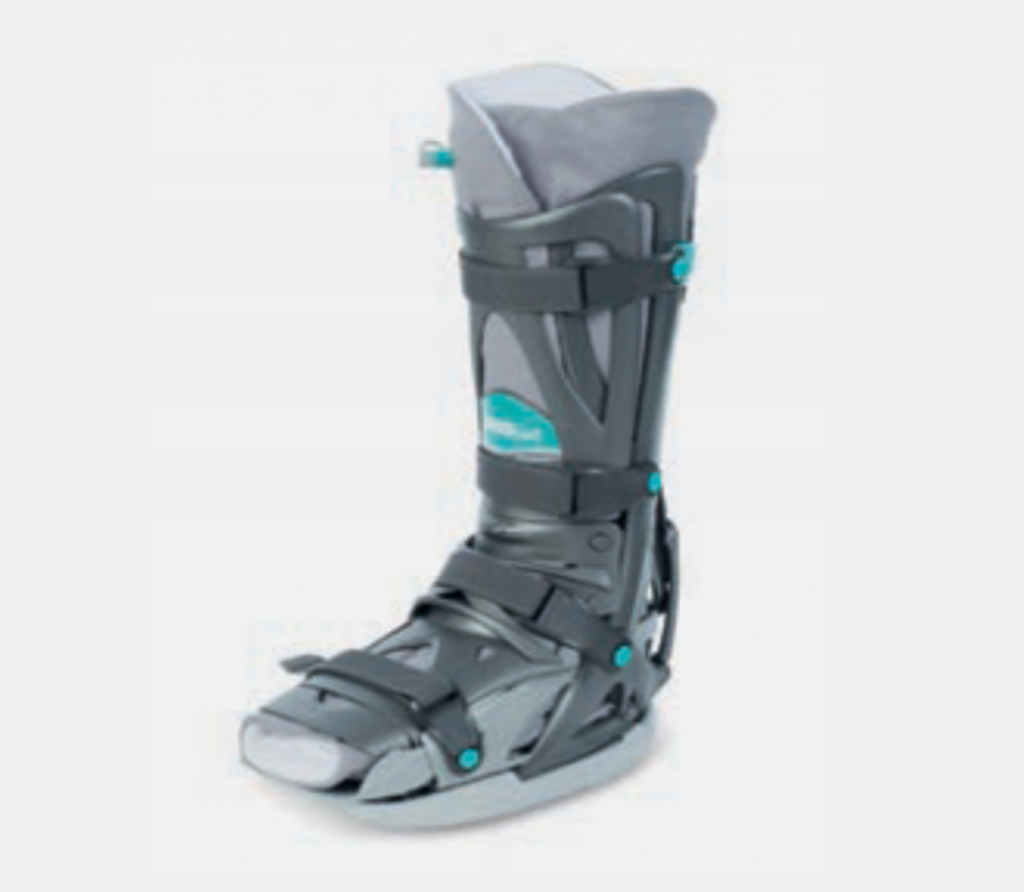 Partial Weight-Bearing
The foot can be loaded with about 25 kg. This corresponds approximately to the weight of the leg and means that you always have to use the crutches. In order to be able to implement this correctly, you will be instructed by our physiotherapists. It is important that you can walk a few steps on the stairs independently with the crutches

Full Weight-Bearing
As soon as pain permits, you can fully
weight-bear your foot. It makes sense to use the crutches for gait safety, at least at the beginning..

Personal Hygiene
As long as the wound is still stitched, i.e. usually in the first 2 weeks, the operated foot should be protected with a plastic bag. The easiest way is to pull the plastic bag over the Vacoped. As soon as the stitches are removed, you can shower and bathe without further precautionary measures.

Thrombosis Prophylaxis
Thrombosis prophylaxis will begin during your hospital stay. Depending on the operation, this prophylaxis must or must not be continued. In most cases, we use Fragmin 5,000 IE pre-filled syringes. They are administered by the patient once a day. You will be instructed by our nursing staff during your stay.

How long the injections have to be administered depends on the operation and the individual risks and is necessary until to full weight-bearing has been reached or until walking without crutches is possible. This can take up to 6-8 weeks.

Ability to Work
A rest period is important after an operation. In the first 2 weeks you should take care of yourself and not work. How long you will be completely unable to work depends, on the one hand, on the type of surgery, and on the other hand, on your stress profile. It is usually also possible, together with the employer, to temporarily find less stressful work. This enables earlier resumption of work.

The certificate of incapacity for work that you receive from us is a preliminary assessment. If you are still unable to resume work after this time, the certificate can be extended accordingly. If this is the case, contact your family doctor or us.
If you feel fully able to work again before this time has expired, you can start working again beforehand.

Driving a Car
When you can start driving again depends on the type of operation. As long as your foot must not be fully weight-bearing (or you use crutches), you must re- frain from driving. To what extent thereafter the ability to drive is restored, is up to you. We recommend abstaining from driving a car when in doubt or if you are unsure.

Check-Ups
You will have a check-up with your surgeon six weeks after the operation. The next steps will then be determined. Usually you can wear your own shoes again. Most everyday activities can be resumed about three months after the operation. Sports activities should only be slowly increased after 3-4 months, so as not to provoke an overload after the break from sports. It is worthwhile to prepare the foot well, with the help of physiotherapy, for the corresponding exertion before starting sports .