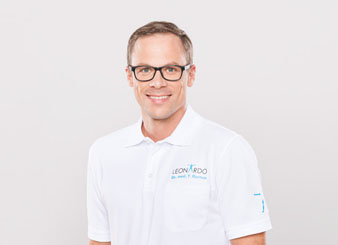 More and more and increasingly younger people suffer from complaints due to wear and tear of their joints. Very often hip and knee joints are affected. If the joint cartilage is worn out, this is called osteoarthritis.

Various conservative methods of osteoarthritis treatment are established, such as movement therapy, splint treatment or pain therapy. If the quality of life or the ability to work is severely limited despite conservative therapies, all that can be done at present is a surface replacement of the affected joint.

In the advanced stage of hip osteoarthritis, only a complete replacement of this ball joint is the final therapeutic option. In the knee joint, three compartments, i.e. separate partial joints, can be distinguished. The inner (medial), outer (lateral) and patellofemoral compartments, i.e. the partial joint between the patella and the femoral condyle (see image below). 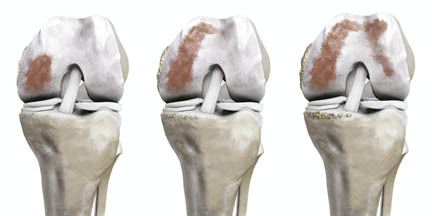 Very often only one compartment in the knee joint is affected by osteoarthritis. In those instances, it may be possible to replace only this partial joint and to preserve the rest of the knee joint.

These factors favour unilateral wear and tear in the knee joint

Depending on the severity of the knee osteoarthritis for example only the inner or outer side may be affected.

Various factors play an important role in this development. Traumatic (accident-related) osteoarthritis caused by direct injuries to the cartilage, as well as metabolic and rheumatological diseases, once excluded, the preservation of the cartilage substance is mainly determined by the leg axis, the stability of the joint, and the condition of the menisci.

If the knee becomes unstable due to a ligament injury (e.g. ACL rupture), the natural biomechanics of the knee joint are altered. With increased sporting activity, this instability can lead to increased shift movements (sliding) in the joint, which can injure both menisci and cartilage.

A healthy meniscus can distribute the pressure evenly in the joint. Due to the injury to the meniscus, the weight is concentrated centrally on the cartilage. The buffer function in the knee is lost. The resulting pressure points damage the cartilage in the long term. The result is osteoarthritis.

These patients will be disappointed by a total arthroplasty

If, despite all conservative therapy measures, the pain is unbearable and the restrictions in everyday life are too great, there is the possibility of a prosthetic joint replacement (artificial knee joint). Since the development of the design prototype of the total knee prosthesis by John Insall in 1972, techniques have been improved, new prostheses have been developed, interventions have been standardized, and drug therapies have been optimized. Despite many efforts, about 1/5 of the patients with total knee implantations are not entirely satisfied, or even dissatisfied, according to literature.

Today we know that a prosthetic treatment of the knee joint should not be carried out too early in the development of osteoarthritis. Of course, the function of an artificial knee joint is not as good as that of the healthy, original knee joint. The indication is only given when the cartilage coating has been completely used up and there is bone-on-bone contact. Patients who are operated on too early will therefore benefit less and are likely to be disappointed with the result.

If a patient has practically unlimited mobility of the knee joint (around 150 degrees) despite advanced osteoarthritis, he or she must be informed that he or she will not achieve the same mobility with a total prosthesis. The mechanics of the prosthesis often only allow a maximum flexion of 120-130 degrees.

Younger patients with osteoarthritis place high demands on the function of the operated knee joint. Painless weight bearing in everyday life is not sufficient. Sports activities should continue to be possible. With the implantation of a total prosthesis, patients lose the proprioception (perception of movement) of a natural knee joint to a large extent. Certain sports activities cannot be continued as before. Some patients will not be satisfied with what has been achieved despite being pain-free.

These points must be observed very carefully for a partial prosthesis

Not every knee joint worn on one side can be fitted with a partial prosthesis. In patients with unilateral knee joint osteoarthritis and a very pronounced leg axis deformity, it must be examined very carefully whether a partial prosthetic fitting is possible. If there is an inclined joint level in addition to the unilateral osteoarthritis, a partial prosthetic fitting cannot be carried out. The tilted weight in the joint would lead to premature failure of the prosthesis. The joint angles should therefore be precisely measured before surgery.

If osteoarthritis has been preceded by an accident or even surgery, it is important to check carefully whether the stability of the knee joint is sufficient. If there is an insufficiency of the cruciate ligaments, no partial prosthesis can be implanted. Otherwise, this would lead to premature failure of the partial prosthesis. If a cruciate ligament reconstruction was previously carried out, it must be thoroughly examined both clinically and by MR diagnostics to determine whether the regained stability allows for a partial prosthetic fitting. If there is increased play in the knee joint due to an insufficient ACL reconstruction with a so-called positive pivot shift test, a partial prosthetic fitting must also be refrained from.

Joint osteoarthritis can occur as a result of a systemic disease. For example, if rheumatoid arthritis exists, the cause of knee osteoarthritis is a generalised disease of the entire body. Often several joints are affected. Even if one knee joint is only radiologically worn on one side in the course of such a disease, the entire joint is still affected. A partial prosthesis cannot remedy the problem and is therefore contraindicated. The same applies to osteoarthritis in the context of other inflammatory joint diseases such as psoriatic arthritis or gout arthropathy. The presence of a pseudo-gout, the so-called chondrocalcinosis, i.e. an accumulation of calcium deposits (calcium pyrophosphate) in the joint, is considered a relative contraindication for the unicondylar knee arthroplasty.

Patients with heavy physical work used to be excluded for treatment with a partial replacement. In the meantime, this has been relativized, as well as severe overweight and advanced age. Especially older patients benefit from the advantages of a partial replacement compared to a total prosthesis.

These points speak for a partial knee arthroplasty

It has already been explained that the function of a partial prosthesis is clearly superior to a total prosthesis. Especially young patients with very good function of the joint and good mobility can receive them, which leads to increased satisfaction after partial prosthetic treatment.  This is accompanied by the fact that patients with a partial prosthesis achieve improved proprioception, i.e. improved joint feeling, by retaining the anterior cruciate ligament. The biomechanics of the knee joint are changed much less with the ligament apparatus retained, which also explains the better function of the partially prosthetically fitted knee joint.

It is also known from various studies that the risk of infection is significantly lower when a partial knee arthroplasty is done than when a full knee replacement is performed. An infected implant is still an extremely dangerous and costly complication to treat. The reduction of this risk with a partial prosthesis is an extremely relevant argument, especially for older patients. These patients also benefit from much faster rehabilitation and improved mobilization after implantation of a partial replacement. This is an important argument in favour of a partial prosthesis, especially for patients with cardiovascular secondary diseases.

In summary, it can be stated If the knee joint is affected by unilateral osteoarthritis, a partial prosthesis is preferable in the interest of the patient in view of the reduced risks and improved function. In particular, the stability of the knee joint as well as the leg axis and joint angle in the knee joint must be carefully considered. 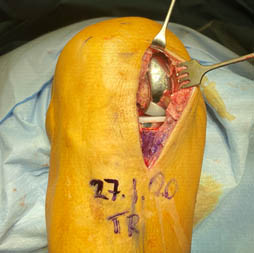 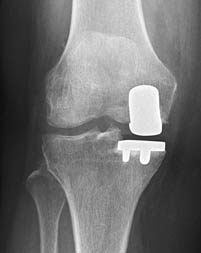